My kids watch these silly YouTube shows about life hacks all the time. Most of the things they share are just dumb and I often wonder why people even think of trying these things. But once in a while they’ll show me something and I’m like….hmmmm why didn’t I think of that!

So today’s Tuesday trick is my idea of a life hack! I watch the news every morning on my iPad while I make my kids lunches, in the evening while I’m making dinner I usually put whatever Netflix show I’m catching up on or even randomly throughout the day when I’m doing dishes or baking, something is on the iPad on the kitchen counter. I just finished Netflix ‘You’ and recently started ‘The Killing’ on Amazon Prime Video….sooooo good! But some days there is so much stuff on the counter that the IPad is either in the way or so out of the way I can’t see it.

At my last IKEA trip I bought this little tablet stand which is inexpensive and perfect. But still it takes up space and often gets pushed back so far that I can’t see it around whatever it is I’m doing. I started googling and checking Amazon for some device to mount the iPad. But I’ve seen them mounted in kitchens and I don’t want anything permanent that will get in my way. Plus I cook & bake ALOT so I need my counter as open as possible without obstructions. I also don’t really want to spend fifty bucks or more on something I may not like or even use very often, or what if it doesn’t work for the space I have. I don’t know what made me do it but I opened my corner cabinet and decided to perch the stand I got from ikea inside the door …and perfection! It worked!!! Now it hangs perfectly in the corner, plus it’s not permanent so I take it down whenever I need to move it or the kids want to borrow it. Problem solved! Keep in mind this will only work if your iPad or tablet is in a case so it doesn’t slip. Mine is in an inexpensive rubber case from Five Below so it stays right in place. And I take it down at night because I don’t trust the cat 🐈😂

I’m not kidding it’s perfect. Go spend $3.50 and get this little stand from Ikea!! 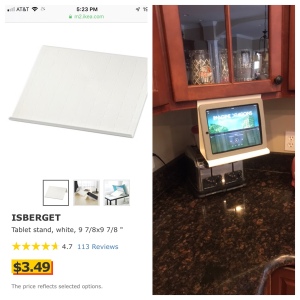